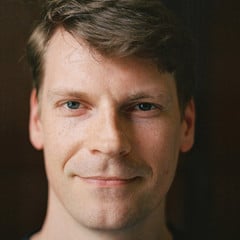 My career in the entertainment industries began in 1999, when I was promoted from dogsbody to projectionist at the Lounge cinema in Leeds, UK. The job was perfect for me at the time, as it served to both help subsidize my university expenses and fulfill my appetite for cinema. After graduating from the University of Leeds, with a Bachelor of Arts degree in Cultural Studies and Media, I enrolled at the London Film School to pursue a career in filmmaking.

During my time at the London Film School I specialized in cinematography and was fortunate to have the opportunity to shoot many student short film projects on 16 and 35mm film. A number of these short films were screened at international film festivals such as Cannes and the California film awards.
I graduated from the London Film School in 2005 with a Masters degree in Filmmaking, specializing in cinematography, and worked as a Director of Photography for the next ten years, up until late 2015 when I made the transition into games.

During my time in the film industry my work was diverse and ranged from TV commercials for brands such as Samsung, independent feature films such as 'Jump', grand period drama's like 'Mr. Selfridge', motion-control, stop-motion music videos, documentaries and a number award winning short films; for one of which, 'Another Love,' I was awarded the Best Cinematography prize at the Sydney International film festival 2016.

As a cinematographer, I was represented by Intrinsic London (formerly Dinedor management), and able to shoot in countries such as Italy, France, Cyprus, Spain, Ireland, Holland and the UAE. I was also honored to be invited to the Berlinale Talent Campus to study with Wim Wenders, one of my film-making heroes. They say don't meet your heroes but in this case the maxim proved to be wrong, and he was inspirational; teaching me that there is a universal language in art that can transcend medium.

It wasn't until around 2010 that I started to connect my filmmaking experience with computer graphics and then later; game development. As a child I had always been crazy about video games and started out with a C64, upgrading to an Amiga and then moving up through the consoles as time went on. But I had no understanding of how games were made and it wasn't until the XBOX 360 and PlayStation 3 generation that I started to see the immersive cinematic potential that modern games had. I was blown away by the visceral imagery, sound and atmosphere that DICE had created in Battlefield Bad Company 2, and the fun, cinematic style of Naughty Dog's Uncharted series.

Through my work as a Director of Photography I had been exposed to a fair bit of VFX and post production, so with pointers from a few colleagues, I started to tinker around with 3D applications and taught myself how to use Maya and Unity. When I discovered V-Ray renderer, it really clicked with the cinematographer in me, as it was physically based and I could treat the lights and cameras in the same way that I would on a live action shoot.

Once I had been able to make the connection between my filmmaking experience and CG lighting, I was able to start to apply this understanding to real-time applications too, and again pursue my childhood passion for video games, but this time, in a development capacity. Since then, I have continued to learn new tools, such as Blender and Unreal Engine, and it's finally reaching the point, with game engine technology, where the tools are physically based and very empowering for lighting artists such as myself to be able to approach game lighting with many of the methodologies and principles of cinematography.

In 2015 I started my first job in the games industry as a lighting artist at Splash Damage, in London, working on the Gears of War series with The Coalition/Microsoft. I then moved to California to join the team at Ready at Dawn Studios, as their senior lighting artist, where I have worked on the Lone Echo series. I had the opportunity to be a speaker on the 'Future of Real-time Lighting' panel at GDC 2017 and become a member of the Visual Effects Society (VES). In recent months I have also become a mentor in the Ten Thousand Hours mentoring program, where I have helped my first student learn the fundamentals of lighting and helped them build a portfolio on their path to becoming a lighting artist.

I currently work at Respawn entertainment on the Star Wars team, as the Lead Lighting Artist.